Dr. Lynne Kitei is an internationally acclaimed physician and health educator who pushed aside her successful medical career to pursue The Phoenix Lights book and internationally award-winning Documentary project. She was leading the cutting edge era of early disease detection and prevention as Chief Clinical Consultant of the Imaging-Prevention-Wellness Center at the world renowned Arizona Heart Institute in Phoenix, Arizona until coming forward, after seven years of anonymity, as a key witness to the historic and still unexplained mass sighting throughout Arizona on March 13, 1997

Dr. Lynne has been called the "woman pioneer" of medical communications in TV Guide after creating and producing innovative TV News health reports for NBC in Philadelphia in 1976. Since that time, Dr. Lynne has dedicated over 40 years to global public awareness, wellness, and health education. She has appeared as the resident health reporter for NBC affiliates in Philadelphia and Phoenix, and has been featured on USA Cable, FOX TV News, FOX in the Morning with Mike & Juliette, ABC, CNN and CBS affiliates, Comcast, 8 News Now, Las Vegas, NV with George Knapp, NBC Japan, Spanish & India TV, NBC Japan, MSNBC, Dateline NBC, National Geographic TV, The Travel, Science, Discovery and History Channels.

As the producer, writer, and director of the "You Make It!" health video and workbook curriculum series, Dr. Lynne has been recognized with the Telly Bronze Award in 1995, the National Education Film & Video Festival Silver Apple Award in 1994, the New York International Film Festival Finalist Award in 1992, and 1993, and many others. She worked under the auspices of the Arizona Community Foundation for 20 years to help fund and distribute her revolutionary prevention/education programs to schools, churches, youth groups and libraries throughout Arizona. Just Say KNOW to AIDS, Just Say KNOW To Drugs, Teen Pregnancy... Children Having Children and Drugs Don't Make IT! have been distributed worldwide by Discovery Education since the 1990's.

The Phoenix Lights Documentary has won over a dozen international film festivals including: 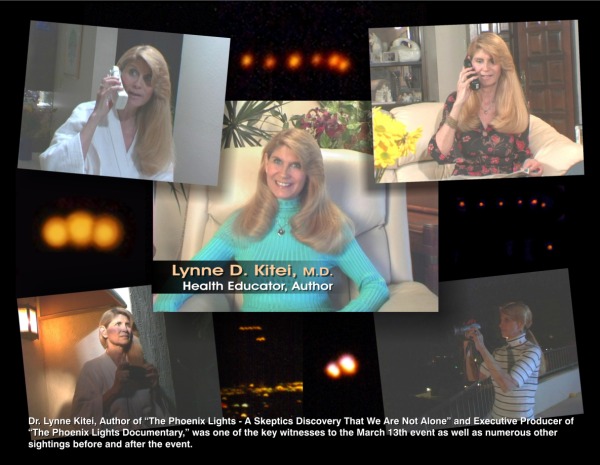 The Phoenix Lights Documentary has also celebrated special screenings at the historic Majestic and Mann's Chinese Theaters, as well as at Warner Brothers Studios in Hollywood, California.

Besides the hundreds of radio and TV appearances sharing the historic Arizona mass sighting, Dr. Lynne continues to tour the US and abroad, introducing screenings of the internationally award winning "Phoenix Lights Documentary," as well as presentations for her best-selling book, "The Phoenix Lights…A Skeptic's Discovery That We Are Not Alone" and riveting power point lecture, "Coincidence or Communication?"

Dr. Kitei shared with me a draft of her additions to THE PHOENIX LIGHTS, and I encouraged her to publish all of them. My attitude is simply "let the data speak." The fact is, this a true story - one that becomes more baffling and challenging the more we learn. It is too important to be ignored or trivialized. Dr. Kitei is giving voice to the data - hopefully many of us will listen and ponder. Gary E. Schwartz, Ph.D. Professor of Psychology, Surgery, Medicine, Neurology, Psychiatry and Director, Laboratory for Advances in Consciousness and Health, University of Arizona

Dr. Lynne's handling of the Phoenix Lights phenomenon and all its implications sets a new standard for sober, matter-of-fact assessments of the evidence for beings more advanced than humans. By eschewing sensationalism, you let the facts speak for themselves, resulting in a more lasting and constructive impact on human consciousness. With her focus on documentation and validation of events, insuring witness reliability, she presents a persuasive case for the "We are not alone." Thesis. This approach makes it impossible for everyone but the "knee-jerk skeptic" to deny that the 20th-century culture of suppression of our larger reality no longer prevails. Her media creativity is a catalyst to a broader cultural awakening. Paul Von Ward, MPA & MSc, author of Gods, Genes & Consciousness and The Soul Genome: Science and Reincarnation Paul.Von-Ward@post.harvard.edu www.vonward.com

The event of the Phoenix Lights was unprecedented and very well documented by several skilled UFO researchers, among them is Dr. Lynne Kitei, who's done an accurate and comprehensive evaluation of the case. Her investigation is a great contribution to the understanding of the unquestionable and ever-increasing alien presence on Earth. The Phoenix Lights DVD is a must-see for anyone who seeks answers to the most compelling questions ever raised by mankind: since we are not alone, who are these visitors and what do they want from us? A. J. Gevaerd, editor of the Brazilian UFO Magazine for 25 years. UFO researcher for 35 years"

Two women are chiefly responsible for preventing the events of March 13, 1997 from fading into history without impact. One is former Phoenix Councilwoman Frances Emma Barwood who risked her political career, refused to be cowered and did her job on behalf of her constituency. The other is Dr. Lynne D. Kitei who risked her professional career to investigate, document and promote public awareness of what happened that evening. One demanded the truth from her government. The other brought the truth to her fellow citizens. All are in their debt. Stephen Bassett, Executive Director, Paradigm Research Group

The Phoenix Lights case is one of the most significant waves of UFO sightings ever to have occurred. There are, I think, three main reasons for this. Firstly, the location. This was not some isolated sighting in a remote rural area, but a significant event seen by countless witnesses in and around a major city. Secondly, the involvement of Fife Symington III, who was governor of the State of Arizona at the time of the incident. He famously brought his chief of staff onto the stage dressed as an alien, during a press conference, to say that the culprit behind the UFO sightings had been found. Interest and concern was thus replaced by humor, but in later years he confessed that he had seen it too, describing "a massive delta-shaped craft" which as a former pilot and Air Force Officer he said "did not resemble any manmade object I'd ever seen". The third factor is the internet, the explosive growth of which coincided with these sightings, providing the perfect way to get word out concerning this event and to showcase the numerous photos and videos that had been taken. Dr. Lynne Kitei has done more than anyone to research these sightings and to keep them where they belong - under the media spotlight and in the public eye. Nick Pope, Former UK Ministry of Defense.

The Phoenix Lights event was one of the most important mass witnessed UFO events in US history. Thanks to the dedicated work of Dr. Lynne Kitei, this event- and other ongoing events in the Phoenix area- have been brought to the world's attention, moving Disclosure forward. Steven M. Greer MD Founder, The Disclosure Project www.DisclosureProject.org

Dr. Lynne Kitei's work is unparalleled in its accuracy and message. Her firsthand witness testimony is the basis of good research and the Phoenix Lights phenomena is historic in its nature. It is a manifestation for mass consciousness and mass awakening for this Planet. As a journalist and educator, I recommend that all read this book and understand that truly "we are not Alone." Paola Harris, Journalist & Author, Italy

Dr. Lynne Kitei has done a superb job in presenting what was one of the most massive and dramatic multiple sightings of UFOs of all time, sometimes called "The Phoenix Lights." Anyone seeing the updated book and video cannot any longer be a skeptic about the UFO phenomenon--or if anyone continues to deny it, they're the ones who are in fantasy land. Astronaut, Dr. Brian O'Leary, Equador

Dr. Lynne Kitei courageously offers truth and honesty on the most important and most witnessed UFO case ever experienced. Officials offered ridicule, obfuscation and outright lies in response to legitimate questions and inquiry. Enter here for knowledge and light on the Lights. I put my trust in Dr. Kitei who never exaggerates and bravely offers her "cure" for all of us whom the government and military deceived. Paul Davids, Executive Producer of ROSWELL

Dr. Lynne, thank you for having the courage to come forth with your video and with your book. Speaking straight means to speak the truth. The truth must be made known. In the words of a very well known Native American who always spoke the truth: "You must speak straight so that your words may go as sunlight to our hearts." - Cochise, Chiricahua Apache. Jaguar Thunderwolf

Dr. Lynne is one of those magical people who have been tapped on the shoulder by something truly extraordinary and mysterious, and rather than turn and run from it, she has bravely walked into the unknown. Her spirited mission is of the deepest caring and compassion, and her hunger for knowledge is voracious. Both documentary and book are stunning examples of the freedom of our times, and the great power of the individual to make a difference in a noble quest for truth. I am so happy to see her fantastic work touching the hearts and minds of people around the world. In my opinion, Dr. Lynne is a true American hero. Chris Dane Owens, Producer, Hollywood CA

I've been impressed with Dr. Lynne's courage and her open and honest pursuit of the truth surrounding what she witnessed herself that night in Phoenix. She is a highly credible and professional person with so much to loose when it comes to credibility which has so often been questioned surrounding the subject of UFO's, but she is stand fast in her description of events and knows what she did not see. Colin Andrews, Crop Circle expert, UK

I have so many things to say in my mind and in my heart for Dr. Lynne's work. The Phoenix Lights book is a corner stone in international UFOlogy. Special thanks to Dr. Lynne for being a pioneer in this field. Farah Yurdozu- UFO investigator & author, Turkey

"The Phoenix Lights" is now one of the great wonders of the world for those who have their eyes and minds open. David Sereda, researcher & filmmaker

The strange and still unexplained luminous phenomena in the skies above Phoenix over many years now is a clear and continuing plea to the scientific community to get involved. Why it hasn't yet done so is as fascinating as the lights themselves. Richard F. Haines, Ph.D., Chief Scientist NARCAP

Perhaps the most important result of the Phoenix sightings and Dr. Lynne's own sightings and videos is that it turned Dr. Lynne on to do the things (book, documentary, public appearances, etc.) that she never would have done had they not happened. Her efforts have been very important in bringing this "message" to the public. Bruce Maccabee, Ph.D., Navy Optical Physicist and lauded Ufologist


Dr. Lynne can be reached at: drlynne@msn.com