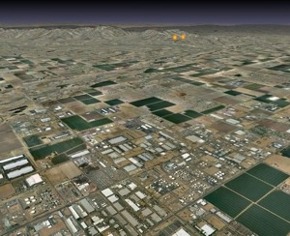 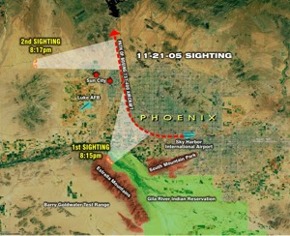 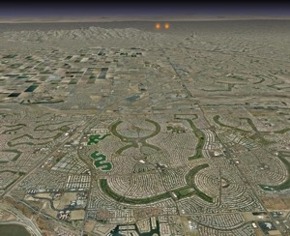 Click on the map above for descriptions of where the orbs appeared. I created
two photo simulations to illustrate what we saw using daytime images for clarity.

My wife Fran and I were in Nashville on business and we decided to take an earlier flight back to Sacramento which had a brief stop in Phoenix. Originally, we were supposed to be on a later flight that had a stop in Ontario, California. Whether it was dumb luck or "meant to be" we ended up taking off from Phoenix Sky Harbor Airport at around 8:15pm, the same time the Phoenix Lights event occurred in 1997. Shortly after takeoff as I was looking towards the Estrella Mountain range, two amber orbs suddenly appeared out of nowhere in a side-by-side formation.

The orbs were visible for a minute or so then faded out as three military jets flew past (the jets were coming from the direction of Luke AFB), then the orbs appeared again. I studied them intently as our plane, a Boeing 737-400, made a turn to the northwest. The lights faded out at the point where I could no longer see them from my window as our plane approached the north end of Phoenix.

I thought this was the end of the show, then suddenly the orbs appeared again, this time in a totally different location northwest of Phoenix at approximately 8:17pm. The same two amber orbs I saw over the Estrella Mountains appeared in the same side-by-side formation, very bright and distinct from all other light sources. I had a perfect view of them outside my window and I studied them very carefully until they faded out, exactly the way they did in Dr. Lynne's videos (Fran saw them too).

I am thrilled I finally saw them for myself not only for validation, but also to have the opportunity to view them in person and analyze them. They did not appear to be aircraft, flares or any natural phenomenon. What is most significant is that they appeared identically in two different locations and I had an incredible bird's eye view on a perfectly clear night.

This is the first time I ever witnessed anything like this and now I can finally say...

"I HAVE SEEN THE PHOENIX LIGHTS!"