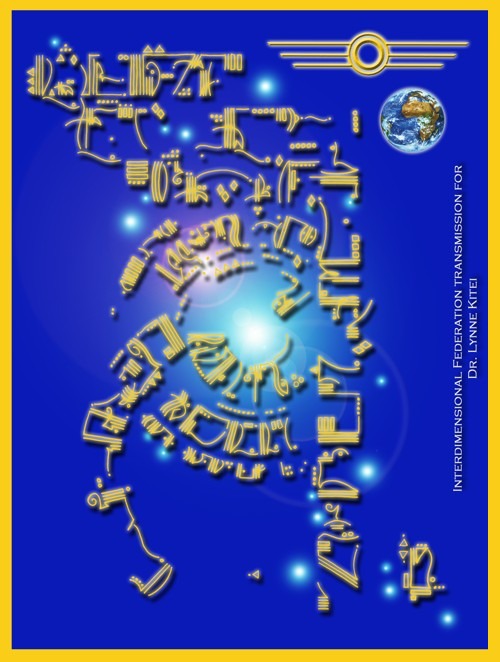 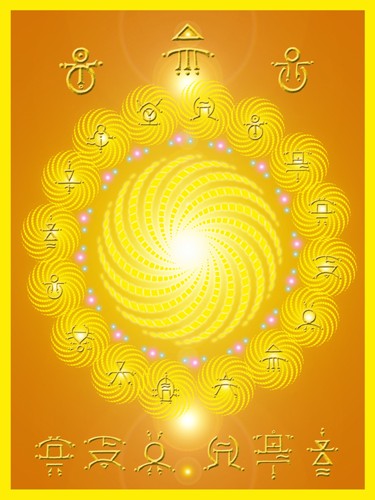 Bryan DeFlores is an incredibly gifted individual who has channeled thousands of amazing art images known as 'accelerators.' Shortly after the Arizona mass sighting events of March 1997, Bryan began receiving mysterious communications, inspiring him to create a series of images for key witness, Dr. Lynne Kitei regarding the Phoenix Lights phenomena. He claims that these illustrations and symbols are associated with the United Federation of Planets and the Interdimensional Alliance, which transmits information and energy directly to both on and off-planet personnel as well as those desiring to make a connection.

These remarkable accelerators are multi-dimensional templates that are designed to trigger a dramatic reconfiguration of our consciousness and assist us in accelerating to the next evolutionary level.

To learn more about Bryan and his intriguing accelerator galleries, visit www.lightquest-intl.com.

BEYOND THE PHOENIX LIGHTS

Could peculiar symbolic writings in crop circles be important communications from beyond? One fellow would say that they are, because he's been receiving them - since the Phoenix Lights event. Bryan de Flores is a regular guy who has never had any art training nor was he ever interested in UFO's or anything of that nature. About the time the Phoenix Lights began appearing to Dr. Lynne, he began receiving a series of communications that prompted him to sketch complex illustrations, blueprints, and strange hieroglyphics on paper, while using both hands at the same time. Miraculously these intricate drawings would only take minutes to complete. He finally felt compelled to communicate his stunning creations to Dr. Lynne on June 7, 2009.

To add another dimension to the Phoenix Lights experience, we are sharing some intriguing examples of Bryan's communications to Dr. Lynne for your reading and visual pleasure…

I recently purchased your Phoenix Lights film and was very excited and impressed by you and the rest of the cast. Like you, something happened to me that has changed the course of my life forever. In December of 1996 I began receiving images and information from various off-planet visitors in the Arizona area.

As I was watching your film for the first time, I heard faint audio sounds in my left ear as I was looking at your photographs. After viewing it multiple times, I began receiving visual transmissions from it. One of them is a transmission directly for you.
These communications are multidimensional Interplanetary Federation broadcasts and are always running, repeating themselves every 55 minutes since the original transmission date in 1995. These patterns were left here on the etheric levels for all individuals involved and can be accessed through meditation or through direct contact, which is how I received them. The hand-drawn codes are written in a universal multidimensional telepathic language, which is understood by every living being, including animals. The broadcast is a direct transmission from the Interplanetary Alliance to you; one of the primary contactees and ambassadors in the Southwest area.

Bryan elaborates on details of Dr. Lynne's mission, former ranking status and involvement with the Alliance, as well as her participation. He continues…

Also, all who saw the craft and those like me who received remote communications from it were destined to see it...or should I say contracted on some level to be a part of this amazing experience. Anyway, I thought you might be interested in the images as it will add another dimension to your work and understanding. Thanks, Bryan

It is important to note that there are respected Ufologists, as well as experiencers, who firmly believe that there is a Galactic Federation protecting and inspiring us. But here is someone who seems to be channeling this premise into an entirely new medium. Especially when Dr. Lynne was informed by esteemed Crop Circle researchers, including Sedona's Chet Snow and UK's Colin Andrews, that a unique form of crop circle, with similar symbols, had appeared in Wilshire UK on both July 27th and 30th, 2009 weeks AFTER Bryan had sent his first symbolic illustration! 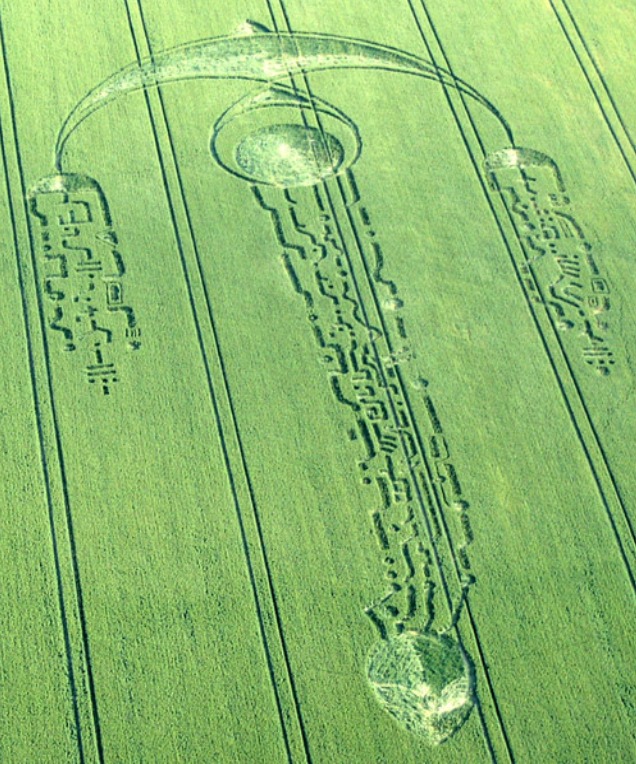 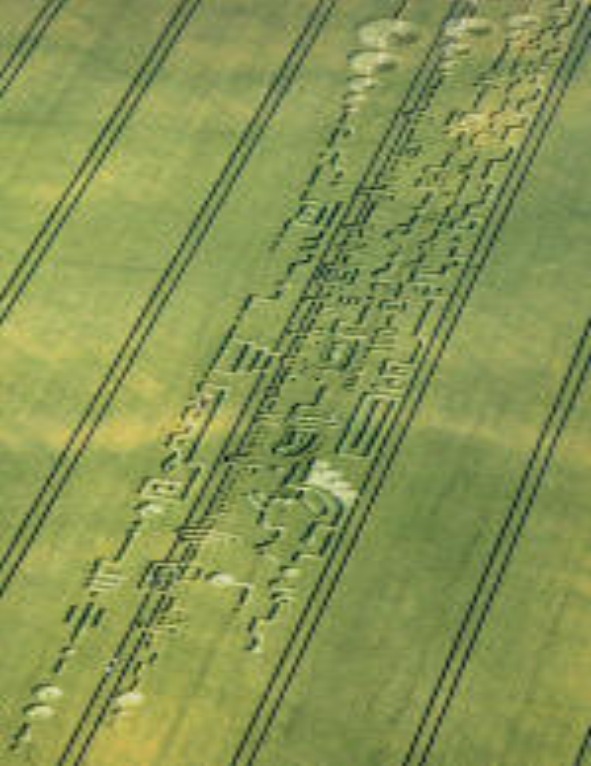 Bryan's cutting edge inspirations didn't stop there. He continued to email picture after picture with in-depth and "illuminating" explanations…

Apparently my association with you has sparked a whole new level of energy to come in. Bringing your initial Federation Transmission through has triggered 3 other blueprints for Teleportation, Free Energy and Antigravity Technology to arrive in the last few days. They contain both spiritual and scientific data and are really beautiful. I have also attached 3 images that I created in 1997 that directly relate to the Phoenix Lights. They are telepathic extraterrestrial transmissions sent directly from the orbs and the triangular starship which flew over Arizona. They represent the current changes within our own DNA and new blueprints for planetary transformation.

In addition, attached is a new template that arrived early yesterday morning. It was addressed to you, so to speak, and reveals some of the Phoenix orb and lights mysteries, particularly the function and purpose of the orbs. The more you ponder on this image, the more information will come through regarding your participation in future contact events.

The two flanking your image are 'telepathic photographs' of the larger Phoenix Lights starship in its etheric form. This multidimensional ship is part of a joint project between many off-planet civilizations which include Andromeda, Arcturus and the Pleiades along with the Interplanetary Federation Alliance. As you can see from the images, it is often difficult for our consciousness to grasp how these ships can morph in shape, size and structure, but this technology is now being seeded on our planet for the future and can account for the variations in same-time sighting descriptions.

The 'Phoenix Lights' craft (was) is a part of this multifaceted mission/project; a preliminary flagship fly-over positioned to awaken the masses and trigger many of the interplanetary ambassadors (such as yourself) to begin privately sharing and publicly disseminating information related to the consciousness transformation currently taking place on our planet.

It seems you and your group have done an incredible job and are being prepared for a much larger event. The Phoenix Lights Network, along with many others is forging a new path into the future and initiating a new destiny for our planet. It is all so very exciting, isn't it? The flood gates are open..., Bryan 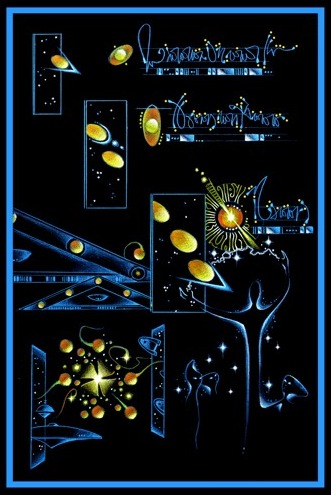 This morning, a tall silvery looking human representative from the Federation appeared and showed me the key symbol and insignia of the 1997 Phoenix Starship and asked if I would draw it and send it to you....

This symbol is a galactic Christed emblem for universal peace and adorned on all three sides of the ship as well as the uniforms of all personnel aboard the craft. They say this electronic symbol /insignia transmits and receives telepathic and verbal communications between those on Earth and the beings on the ships. It is also a meditation piece which is best placed where you can view it frequently. In fact, I was told this design was key to the experience and was telepathically projected to many who viewed the ship…but somehow it was never made manifest on paper or other media.

Anyway, it feels like they will be sending through a number of diverse images from the continuing Phoenix Lights experience that will help others to move from the mystery of it into the higher consciousness understanding that was intended… 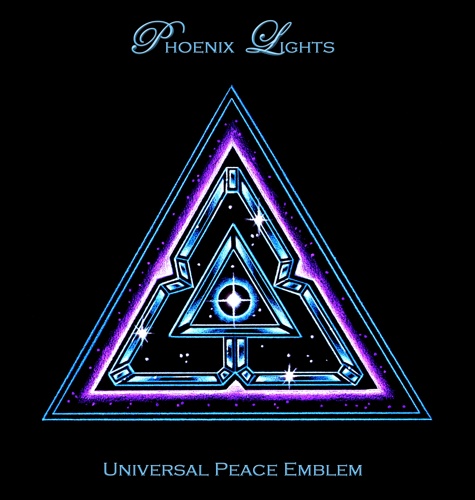 As we were putting the finishing touches on the Phoenix Lights Network website, Dr. Lynne received these stunning new communications from Bryan.

I was drawing some images early this morning and had a visitation from the Archangels who asked me to create this image for you. It is an Angelic healing matrix which was specifically designed for the global awakening work that you are doing. The design was a gift to you from the Archangels and is a universal soul activation piece written in the Language of Light, also known as the Language of the Angels. Its high frequency colors and design will also heal and awaken the light within each soul who gazes upon it. 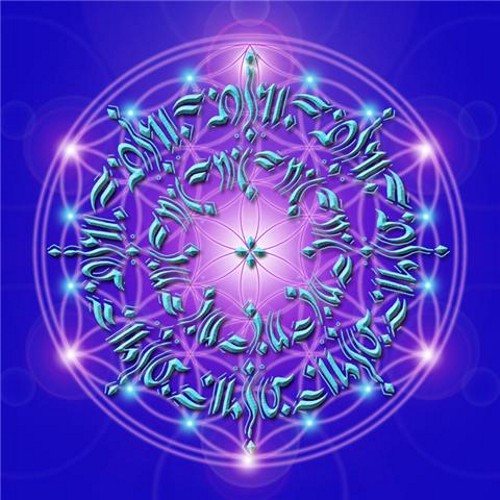 Below is a new image that came in for you from the Federation.

To begin, I had told you some time ago that your original photographs contain more information than meets the eye. This was confirmed by a Federation representative, who said there are other levels to these photos and much important data to be retrieved. So, using my extra-dimensional sight I was able to access some of these subtleties. As I started to focus in on your last orb photo 2-6-95, I was astonished to see how much information that it contains. I then focused specifically on the 2 orbs in the lower right hand corner and drew the attached image. It is a transmission, a greeting and invitation, which was being sent from the Starship directly to you through the orb. In addition, they said that when one is experiencing an orb or craft sighting or transmissions from an extraterrestrial intelligence, these will be accompanied by an unusual silence or ringing in the ears, which is a signal that your consciousness is phasing, merging and communicating with a non-terrestrial intelligence.

The Federation representative also told me the orbs are bio-mechanical unmanned metallic spheres which are part of the ships navigation system. They can function independently or in groups for reconnaissance purposes and for transporting personnel to the planet's surface…which in your case he said there was actually 3 beings near the orbs when you took this picture. They also say that the orbs will often change color (which indicates a function change) and although they may appear oval to naked eye are in actuality round…but are usually seen as slightly oval within our atmosphere. Also, each of the orbs holds the blueprint program of the whole craft and can leave the ship and reformulate the entire craft at another location instantaneously. 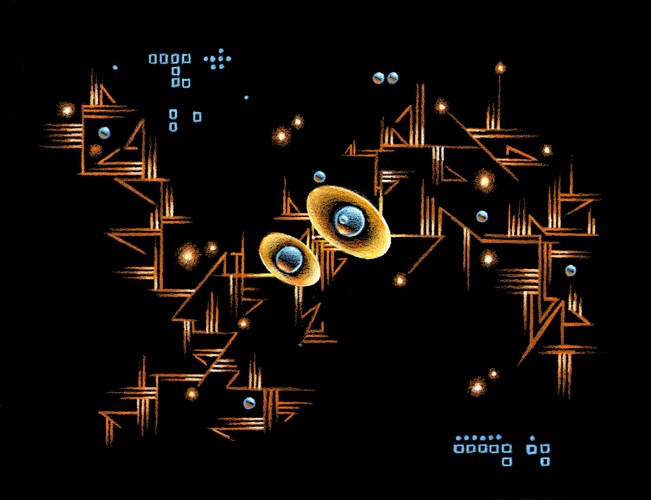 Below is a new 1997 Phoenix Starship formation image that came in for you from the Federation.

Regarding the Phoenix Starship formation image below, there were a total of 7 ships involved; the primary craft, 5 escort ships and 2 ships operating from a remote location. The primary Phoenix Starship was triangular (rounded) in shape and is the standard Federation glider-craft for flyovers, recognizable to all visiting ET groups and some of Earth's governments. Most of the Starship, other than its triangular frame and orb housing, was invisible to the human eye as the bulk of the ships structure was moving in another dimensional frequency. However, often a grid or wavelike energy will be seen from underneath as these flyover-ships energy often fluctuates within our atmosphere. Furthermore, the ship was operated by 7 Federation representatives and a crew of 226 A.I. (Artificial Intelligence) automatons. He also said that in most UFO sightings things are not what they seem, as our atmosphere, gravity and 3D perception often distort what is happening. In closing the representative stated that most all of these sightings/flyovers are scheduled events and not random occurrences as some may believe. Again, nothing is quite what it seems in these experiences and they are eager to pursue further communications with those who are looking for alternative answers and seeking the truth about these mysteries. 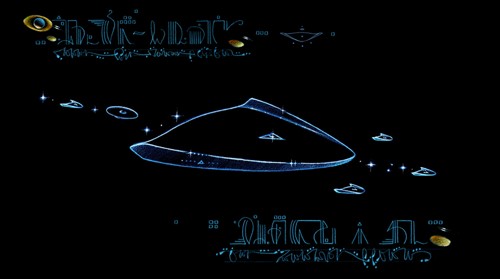 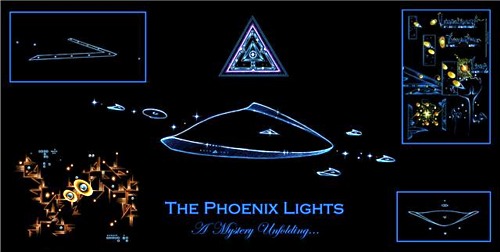 May the Source be with you…